By admitting his passion for the pirates of any edges, Stan Guigui excludes the picturesque and rejects the delicious taste of the voyeurism. We find sign neither of the one nor the other one in "Cuchillo Bohemio"; just a concern in front of the strange beauty of this mortal dance.
The concern is everywhere in this photography, it soaks it and saturates it. This flesh, in the light of the lantern, the naughty faces of thieves, appears at night to settle some account.

This narrative has nothing of a fiction. We find the mixture there which gives to Stan Guigui's work its special coloring. We guess the smell of bad alcohols and vapors of the drug, the shouts, the swearwords which weave the backcloth of this duel to death in the bottoms-districts of Bogota. Half naked men face each other and are in confrontation in a commitment which is not feigned. And as all in this district fight for surviving, the protagonists show themselves of a singular skill in the knife. The scene, weakly lit, we discern then in the vagueness of the movement of the silhouettes which do not make more than one.
Stan Guigui already possesses a beautiful collection of these faces, any exits of Cartucho, this district curses of Bogota. But the portrait is not the subject of "Cuchillo Bohemio". Reason why El Mono and Lengua Negra, the heroes of this fight, distrust up to the death is unknown us and do not concern us. The world of Neros will remain for ever a closed universe and outside the reason. There is nothing to learn of these photos.

The raw treatment of the images digs up the energies and reveals the elementary and organic strengths of the body. The photographer, by getting into this step - of two disastrous, re-qualifies the scene and removes it any folk and documentary character. What we see is nothing else than a dance of death, a moment emptied of its information to become the ghostly shape of a duet. The movements, the jumps, the capers, in brief the instability and the ingenuity of both bodies offer themselves to the sensitive experience of the photographer.
We face a profusion of actions and gestures which have no meaning. The action takes place apparently according to the laws of nature of the duel. We avoid each other, we counter and we counter-attack. The eye is trapped and forced, deprived by choice, it passes from a character to an other one but unsurprisingly. It is a strange feeling the attraction which we have for this confrontation. Let us admit it, the shock is worth only for its shape, its harmony, the perfection of the coordinated body movements. Here we are, we spectators, trapped by a poetic approach of the strength and of the guile, because we recognize the inflexible character of the vitality and the primitive disorder there.
Here we are associated, as closely as possible to the scene, to the singular and ritualized combat. The spatial marks are deliberately blurred. The space, the dark matter, lets guess lines and tensions, folds and curves modelled by the effort and the fear. The violence is not only an emotion or a consequence of a passion but also a picture of materials and textures which wrinkle, spread and withdraw. The bodies which we touch are deformed by the fight, damaged and indefinite. But they are lively, burning and capable of creating original, sculptural forms.

Beyond the Hispanic "custom" we glimpse an archaic approach of the culture of the body, a codified ceremony, a moment dug up by our memory. Everything separates us from these striking bodies and nevertheless we feel us unite organically with them. Beyond what we see, or rather thanks to what we can perceive, shows itself a power superior to our acts, a faith in a strength which drives us, more powerful than our will and our culture. 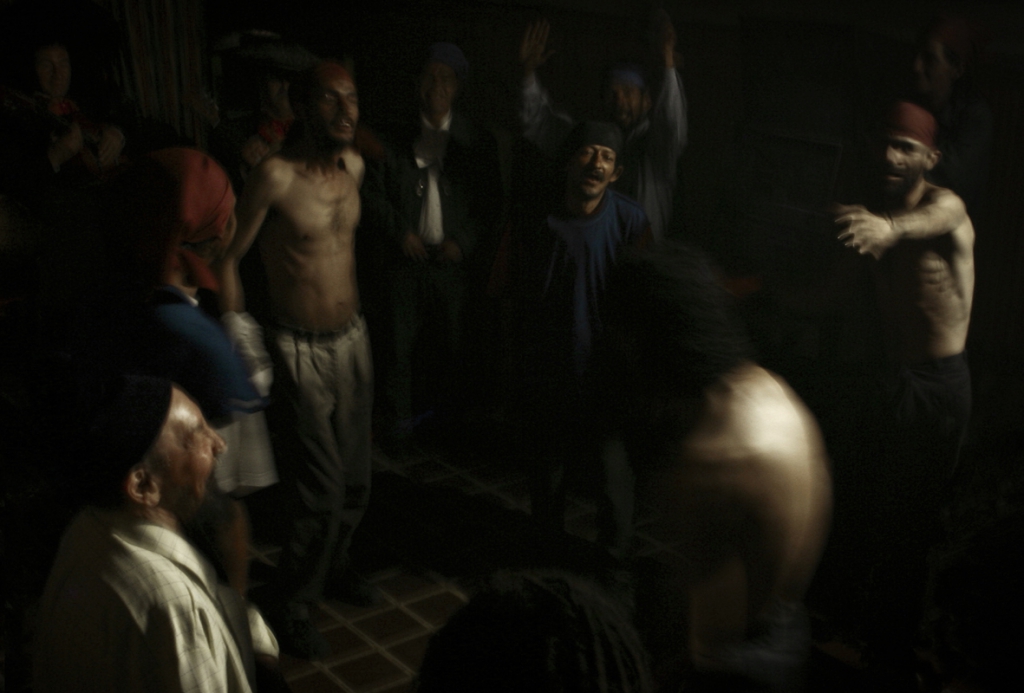